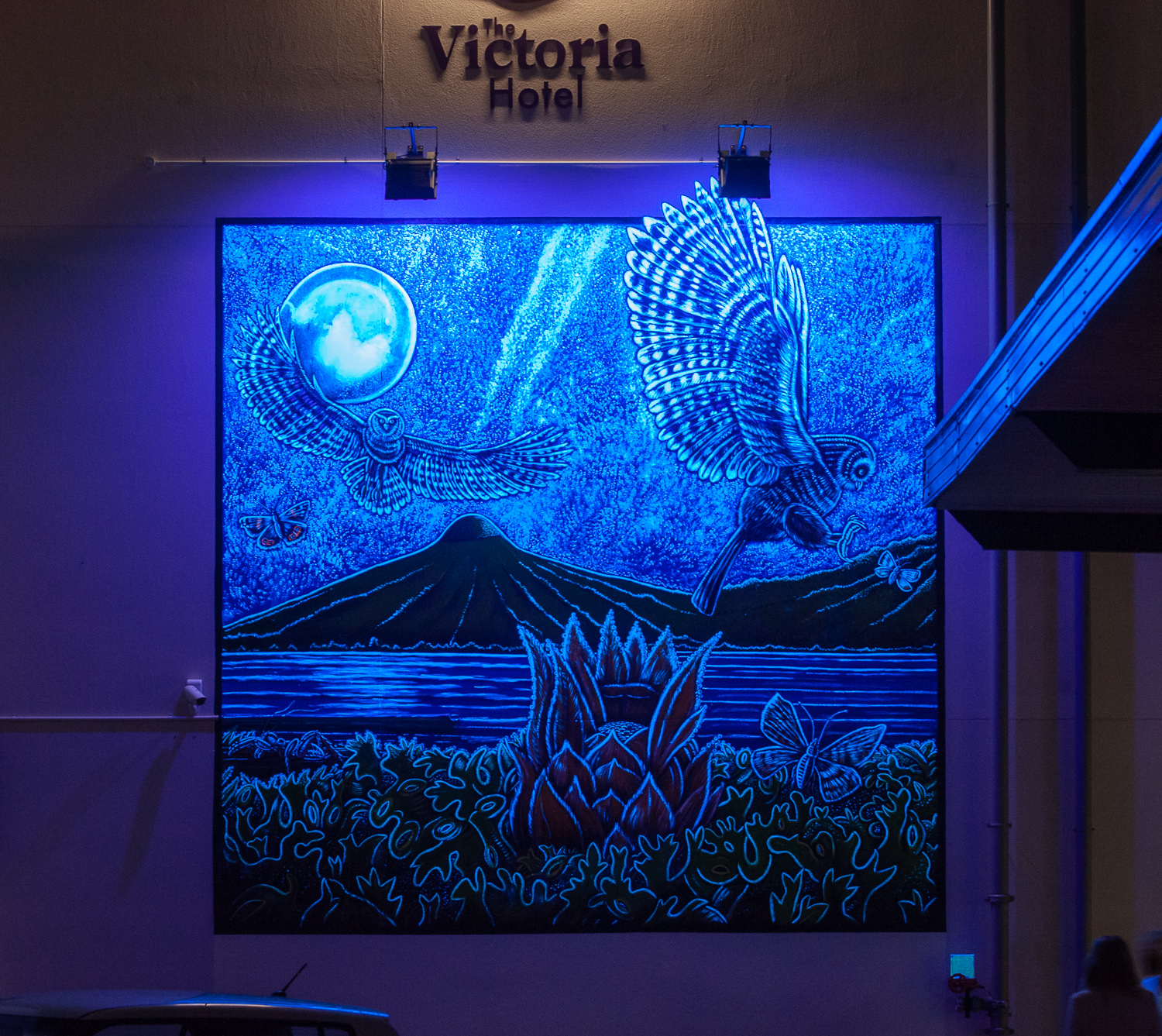 But on the 31st of January this year, the Dodd-Walls Centre, the Dunedin Street Art Trust, and Otago Museum presented Aotearoa New Zealand with its first ever mural where street art meets photonics.

The nation’s first ever light-reactive mural was produced by local artist Bruce Mahalski and has been in the works for over three years. Like other street art around the city, this piece also features tāoka species… but only ones associated with night.

The flower in the foreground is Te Pua o te Rēinga or Waewae Atua (depending on iwi affiliation). It is the only fully parasitic flowering plant endemic to New Zealand. Also known as a wood rose or Dactylanthus taylorii, it was previously pollinated at night by pekapeka – the NZ lesser short-tailed bats – who fed on their nectar. However, the plant is now listed as nationally vulnerable, as it is susceptible to browsing by introduced predators, who also threaten its natural pollinators.

Bruce’s original proposal thus also included a rendering of the pekapeka in flight above the flower. However, with the advent of Covid-19 in 2020, the owners of the site expressed concern about lingering negative connotations the public might associate with bats… if only they could foresee New Zealanders electing one as Te Manu Rongonui o Te Tau/Bird of the Year before the mural was even complete!

So the pekapeka was swapped for a ruru, our native owls. Flying alongside it are several examples of NZ lepidoptera – butterflies and moths, while on the ground next to the flower is a weta – all of which make for a tasty kai for the ruru.

The background scenery evokes Hereweka or Harbour Cone on the Otago peninsula on a cloudless night near a full moon. Te Ikaroa, or the Milky Way, crosses the sky. It is a lovely mural by day.

And at night the mural takes on a special effect, as the near-UV lights installed specifically for this project come on and excite the electrons in the special paint that Bruce used to highlight various aspects of this scene. To Centre members, this effect is well known and understood but to the average passer-by, perhaps waiting at the Dunedin central bus hub for their ride home, it presents an opportunity to engage with photonics in a context and in a location that is unexpected, and delightful.

If you find yourself in the area, particularly this winter, when it gets dark at a more reasonable hour, be sure to take the opportunity to check it out and use it to start a conversation – because science outreach and engagement can happen anywhere!

Hopefully the mural will be added to Dunedin’s street art tours that run at Orange – https://www.dunedinnz.com/visit/see-and-do/tours/walking-and-hiking/dunedin-street-art-walking-tour-small-city-big-walls

Save the date - 2023 Dodd-Walls Centre Symposium

Our Science Team Leader has received the promotion to full professor, congratulations!

Congratulations to Associate Professor Geoff Waterhouse for the award of the Shorland Medal from the New Zealand Association of Scientists for 2022.

Associate Professor Geoff Waterhouse has been awarded the Shorland Medal from the New Zealand Association of Scientists for 2022.